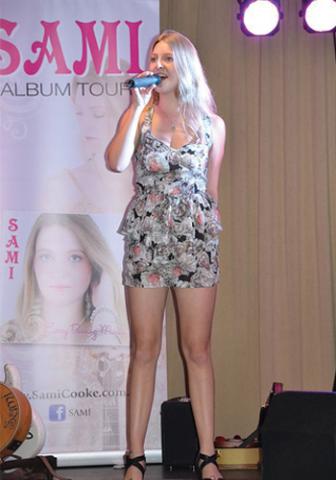 SAMI is an 18 year old singer/songwriter from Young, NSW and has recently moved to Canberra. She captivates her audience with her approachable personality and natural stage presence. Her vocal ability is beyond her years and her song writing has been well recognised within the industry, winning many prestigious awards.

Her debut album 'SAMI- Every Passing Minute' has had two album launches; one in Tamworth during the Country Music Festival 2014 and one in Canberra the 8th of February 2014, to kick off her 2014 Australian Album Tour, which takes her across the Eastern side of Australia (Victoria, QLD, ACT and NSW) for the full year.

‘SAMI-Every Passing Minute’ consists of 13 original tracks and 1 cover, which has taken out numerous song writing awards leading SAMI to Sydney twice to be awarded 10th out of Australia for her anti bullying song “Still Searching” and 20th out of Australia for her songs “One Thing Left” and “You’re Inspirational”. While in Canberra ‘I Grew Up Country’ won 1st for Best Country Rock, ‘One Thing Left’ won 1st for Under 18yrs Songwriters Award and ‘She Never Looked Back’ took out1st place for Contemporary. Tamworth has also been very kind with SAMI being awarded Junior Overall Winner in CCMA against 45 others, Senior Overall in Mt Franklin Quest and won numerous firsts for her songs during this time in CCMA and Manilla.